“Our task (as Realtors) is to be good neighbors and help those in our community during times of transition. The real estate business is a natural out flowing of my passion for land and building communities.” 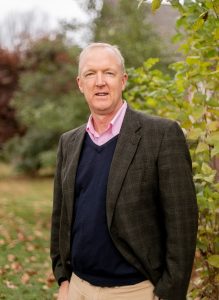 Bill Cochrane grew up on a farm in Chester County, PA (in fact, he still lives on that same farm with his wife, Annemarie, and their dog, Bella). His whole life has revolved around their family farm and the community to which they belong. Whether it was bringing in hay as a teenager or enjoying the beauty of a long walk across the farm on a Sunday afternoon, he’s always held a deep appreciation for the land and what it can produce.

This love of the land started when he was a child; his father and grandfather had this same admiration for it and instilled it in Bill. For several years, when he was a young boy he lived in Montana, where his parents had bought a ranch. This experience of utilizing the land and touching it cemented his desire to be part of something bigger than himself.

In addition to his fondness for land, Bill regards the communities he serves as equally important. Nothing brings more satisfaction and meaning to his life than caring for and being involved in the highs and lows of friends and neighbors as they live their lives.

Real estate, which Bill has been practicing for the last 36 years, is just the natural outpouring of his desire to preserve and restore communities. James A. Cochrane, Inc. is a family business and he’s felt privileged to be able to carry it through to another generation. When asked about what role he sees the firm taking in the future, Bill believes that it will be one centered around helping people in the community where they live and work, whether that means purchasing large acreage for an organic farm or a simply a beautiful home to raise your family. Bill can be reached by calling 610-469-6100 or by emailing bill@cochraneinc.com.

Find my dream home What's my home worth ? Help me relocate